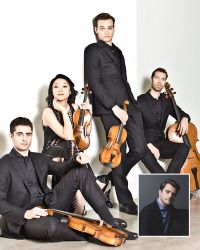 × The Cecilian Chamber Series presents the fifth concert of the 2022-2023 season, "The Kreutzer Affair".

The Kreutzer Affair is an immersive theatrical concert program created by the Tesla Quartet with pianist David Kaplan, exploring how music was captured into words and then rebottled into music again.

The Tesla Quartet was formed at The Juilliard School in 2008 and quickly established itself as one of the most promising young ensembles in New York, winning Second Prize at the J.C. Arriaga Chamber Music Competition only a few months after its inception. David Kaplan is a veteran of numerous distinguished chamber music festivals and series; he balances solo performances with meaningful collaborations, and has played with several quartets.

Featuring Ross Snyder on violin, Michelle Lie on violin, Edwin Kaplan on viola and Serafim Smigelskiy on cello with David Kaplan on piano.