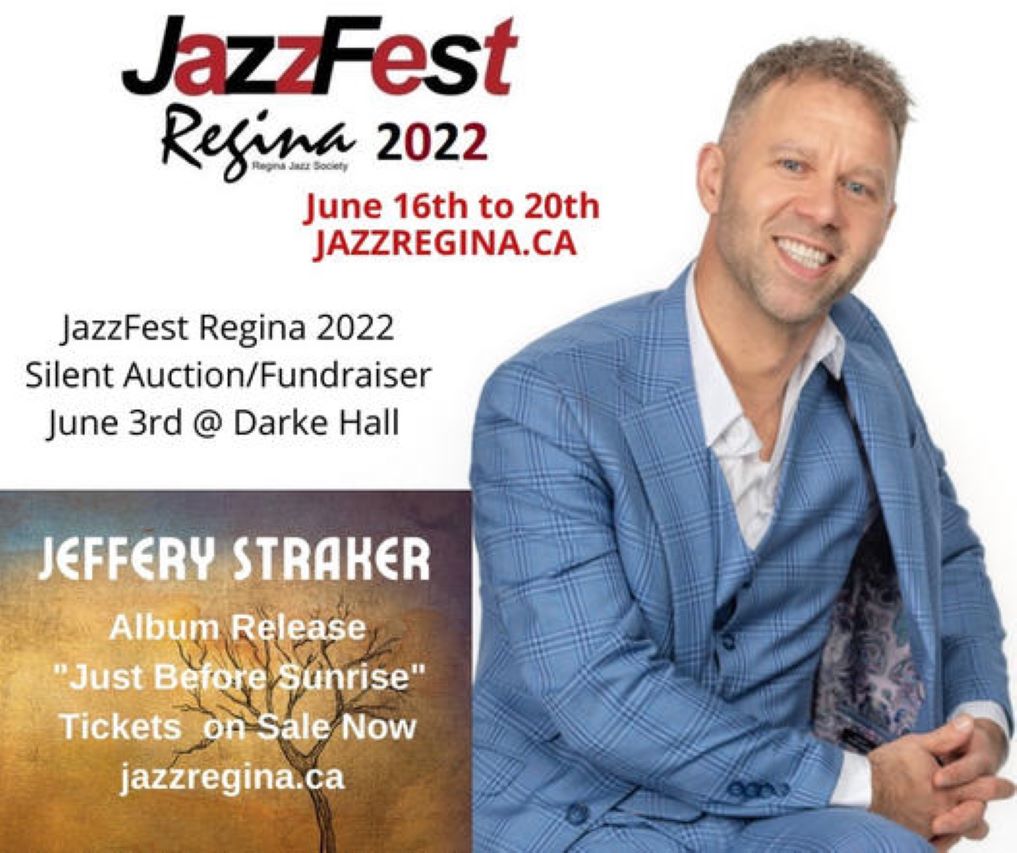 × Join the Regina Jazz Society on June 3rd at Darke Hall for the JazzFest Regina 2022 Silent Auction Fundraiser featuring Jeffery Straker. Tickets are $40 each plus fees and taxes.

Doors open at 6:30 pm to view the silent auction items, followed by the concert at 8 pm.

Jeffery Straker is excited to be performing this concert in support of the Regina Jazz Festival – helping live music to thrive in the Queen City. He’ll be performing a mix of songs drawn from his recordings as well as a few jazz standards he’s cooking up with the band. And speaking of the band - he'll be backed by an ensemble of top-notch Regina players for this Darke Hall show, while seated at the magnificent new Fazioli concert grand piano. Singer-songwriter pianist Jeffery Straker grew up taking piano lessons in a small farming town in Saskatchewan, raised by a church organist mother and an auctioneer father. He’s gone on to perform over 100 shows per year across Canada, Europe and Latin America. Serving up a rootsy-storytelling brand of song with rich narratives, his song writing has the power to transport a listener - out onto a lake in Canada’s North or to the main street of a prairie town. Across 8 albums to date, critical comparisons have been drawn to the likes of Harry Chapin, Kris Kristofferson, Carole King & Billy Joel while performances have seen him live on BBC radio in the UK, on stages with symphony orchestras and in backyards across the country on his recent summer tour.

Jeffery’s songs have been used in TV, film and stage productions and saw him named “Roots-Folk Artist of the Year” in both the 2020 & 2021 Saskatchewan Music Awards. He took home a Western Canadian Music Award in 2019. His latest 10-song recording “Just Before Sunrise” (May 2021) was voted #2 in the ‘Saskatchewan Best Albums of 2021’ rankings by music lovers across the province and earned Jeffery a coveted official showcase at Folk Alliance International in Kansas City. The release of the album was supported with a Covid-friendly 55-concert ‘Pandemic Piano Backyard Tour’. Jeffery will tour in the UK this fall.

“He has a way of drawing us into his world and making us feel like we’re a welcome guest; an old friend he’s ready to catch up with” (CBC Saskatchewan Weekend). Join Jeffery and band for a memorable night of song and story. www.jeffstraker.com